Judaica Americana is a unique collection of one hundred pamphlets published in the United States between 1725 and 1900. The pamphlets include sermons given by rabbis at various occasions, lectures on Jewish/Christian relations, educational pamphlets, historical articles, and biographies of renowned Jews of the eighteenth and nineteenth centuries. There are also political and civic documents relating to the Jews and the government of the United States. Judaica Americana is a primary source for the study of American Jewish life before the mass migrations of the early twentieth century. Digitization for this project was funded by the National Foundation for Jewish Culture. 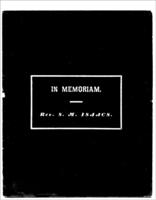 Address delivered at the funeral of Rev. S. M. Isaacs

Annual report of the Society for the aid of Jewish prisoners

Articles of incorporation and Constitution of the Oheb Sholom Congregation of Baltimore, Md. 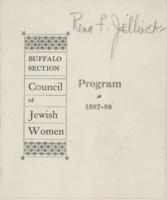 Can Jews be patriots?

Catechism of the Jewish faith

Charter and by-laws of the Hebrew Education Society of Philadelphia

Constitution and by-laws of the American Jewish Publication Society 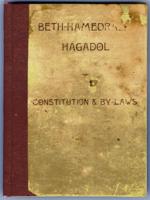 The constitution of the Female Hebrew Benevolent Society of Philadelphia

Constitution of the Jewish Alliance of America

Constitution of the United Hebrew Relief Association of St. Louis